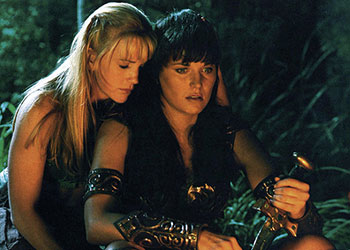 Its been confirmed that there wont be any beating around the bush in the upcoming revival of the lesbian fan favourite fantasy show Xena: Warrior Princess.
Starring Lucy Lawless as Xena, the TV series, which ran for six seasons in the nineties, developed a strong LGBT following thanks to its lesbian subtext, which though obvious to many, was never made explicit.
Now, writer and producer Javier Grillo-Marxauch, who is behind a new version of the show, has addressed how Xenas sexuality will be depicted on screen.
Writing on Tumblr, Grillo-Marxauch revealed that, there is no reason to bring back Xena if it is not there for the purpose of fully exploring a relationship that could only be shown subtextually in first-run syndication in the 1990s.
The original series hinted at an ongoing romance between Xena and the character Gabrielle (Renee OConnor) through hugging, glances and even a lingering romantic kiss in the final episode.
In 2003, Lawless told Lesbian News that Xena was definitely gay.
She explained: Now it wasnt just that Xena was bisexual and kinda liked her gal pal and they kind of fooled around sometimes, it was Nope, theyre married, man.
The Xena reboot is currently in development at NBC Entertainment but a date for its release has not yet been set.