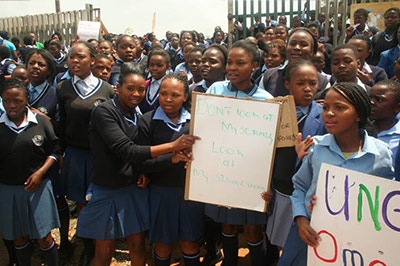 Last year, high school pupils joined their lesbian colleagues in protesting against a similar incident at a School in Tembisa

Allegations of homophobia and gender identity discrimination have come to the fore at another high school in Johannesburgs East rand.

Eight female pupils at the Tholulwazi Secondary School in Tsakane were suspended last month because they refused to wear skirts.

OurHealth reported that the girls, who instead chose to wear trousers, were told not to return to class until they “knew whether they were boys or girls.”

One of the pupils, Ntokozo Mathonsi, 18, said: Everyone at school laughed at us when we are wearing skirts as we are used to wearing trousers.

She added: I personally didnt feel comfortable (wearing a skirt) and said I would go back to school when Im allowed to wear what I am comfortable in as long as I represent school colours.

Ntokozos mother, Silvia, told OurHealth the real reason behind the girls suspension was their sexual orientation.

Our childrens rights as women were violated and their right to education was violated too, she said.

Although some of the girls missed out on a few tests, they returned to school after the Gauteng Department of Education intervened.

Department Spokesperson Phumla Sekhonyane said that, No discrimination of any form including (those based on) religion, sexuality or creed is allowed in schools.

In February last year, a similar incident took place at the Phomolong Secondary School in Tembisa.

Seven openly lesbian teenage school girls were told that they were not welcome at the school because they wore pants to classes. The deputy principal allegedly stated that their satanic lesbianism would not be tolerated.

The department also intervened in that case and the girls were allowed to return to class.

Sekhonyane told Mambaonline at the time that while a school could determine its own dress code, that policy should not in any way breach the Constitutional provisions of equality, dignity and freedom for all.