09 February 2009
Based on the award-winning novel of the same name, The World Unseen is described as, "A moving and passionate love story set against a backdrop of 1950s apartheid". Magically penned by Shamim Sarif and brought to life by her life partner and producer, Hanan Kattan, The World Unseen is a human drama inspired by the stories of Sarifs grandmothers life. 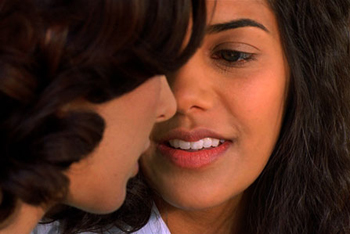 The World Unseen features free-spirited Amina (Sheetal Sheth, who has broken all the rules of her own conventional Indian community, and the new apartheid-led government, by running a café with Jacob, her 'coloured' business partner. When she meets Miriam (Lisa Ray), a young traditional wife and mother, their unexpected attraction pushes Miriam to question the rules that bind her. As Amina helps Miriams sister-in-law to hide from the police, a chain of events is set in motion that changes both women forever.

Mambagirl.coms Ulla Kelly talks to three of the key players of this South African Film and Television Award winning movie.

Unfortunately I havent seen the film yet, if you had to describe it to me in one sentence, what would you say?
SS: Its about challenging convention and its an uplifting story with characters youll fall in love with.

SS2: It's a beautiful coming of age love story set against the backdrop of 1950s apartheid South Africa.

Did you encounter any homophobia while making the film?
SS: No, not at all. We had a very strong production team, who happened to be mainly female, who believed passionately in the themes of the story. That it was important to put this story about a womans emotional growth and integrity on the screen. Also, we found that even with the book, it was not really categorised as a gay story. Despite the very specific setting of 1950s South Africa in the Indian community, people of all backgrounds have related to Miriams journey to independence, which is very universal.

SS2: While we were shooting it, we were surrounded by an amazing group of people who were quite supportive and loved the story we were all telling.

What does this film mean to you personally?
SS: It means more than I can express in words. The World Unseen was my first novel, and I felt I knew these characters so intimately, for so long, that finally seeing them brought to life in the film was a complete thrill. More than that, it was a humbling and fantastic experience to work with my partner Hanan, who produced this film in every sense of the word, and with Katherine Priestley and Lisa Tchenguiz-Imerman, our Exec Producers. And everyone on the crew and cast, who were all driven by passion for the work.

HK: Everything. It was my partners first novel which she adapted and directed and it is based on characters from her award winning novel that we had lived with for many years and it was a wonderful process seeing them come to life.

SS2: When I started reading this book, i couldn't put it down; read it in one sitting I loved it so much - was completely taken with the rich, layered textures told with such lyricism...and it's not often women are written so fully and three-dimensionally. I was thrilled to be a part of the project and play someone with that special spirit Amina carries so effortlessly. 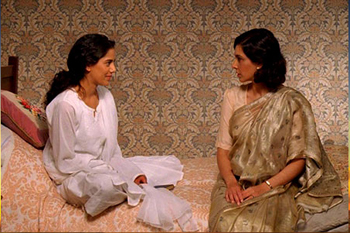 What does the struggle for tolerance mean to you personally?
SS: Its hard to emphasise enough the need for tolerance and, more than that, acceptance. I am all for being judgmental in a way, because we all evaluate each other all the time. But much better to do that based on core values rather than race, gender or sexuality.

HK: It is the only way forward for people to reach a stage whereby they dont judge others based on their skin colour, their sexuality or their ethnicity. I personally dont like this word as it implies that to tolerate someone you start from a position of superiority with condescension that you are tolerating the other person.

SS2: Sadly, the fact there are so many battles that still need to be won breaks my heart and all you can do is never back down and always speak up.

HK: It is the only way forward to have openness and respect.

SS2: Absolutely - you have to believe in the best of people.

We have one of the most progressive constitutions in the world, yet a lesbian couple were murdered in Soweto last year simply for being gay  whats your comment on that incident?
SS: It saddens and disgusts me. People need to be educated and quickly. The idea of homosexuality seems to bother people in the abstract, and I think the more that people are exposed to the idea and reality of gay people, the better. They should be hunting down child rapists, not people who happen to love other people of the same sex.

HK: It is tragic when two people in love and who chose to spend their life together are a threat to their society and their community. It is a brutal act committed by cowards who have forgotten to look deep into their humanity.

SS2: Anyone hurt due to their sexual orientation is a waste. Awful, tragic, and beyond angering.

From the sounds of it, The World Unseen should be seen by as many people as possible; are there any plans for it to be shown to segments of the population that cant get to a cinema or cant afford it?
SS: I dont know. I would like that. We have no more rights to distribute the film in South Africa as we have sold those rights to our distributor here, but I will ask them about that!

HK: I hope Ster Kinekor, our SA distributor, will expand the release from the three key cities to give The World Unseen the exposure it deserves as it can only touch and move people.

Can art change the world?
SS: Yes, it can. Because it affects emotions, and human beings are driven by their emotions much more than by their rationality, in my opinion. You can talk about the horror of apartheid, but when you see a couple who should be together on a movie screen, when you feel that pain that Jacob feels in The World Unseen, I think you understand it and feel it better.

HK: What is life without art? Without the talents of creative people in this world (Shamim being one of them) what hope is there for people? Art and creativity inspire us and elevate us to heights that are breathtaking and that we did not think possible.

SS2: Absolutely - in ways that nothing else could or can. 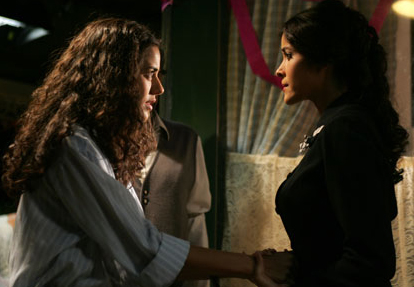 Thinking about parts of South Africa where lesbianism is not tolerated at all, what do you think the rest of us could do to change things for them?
SS: I guess education should play a major part. You cant force people to think differently, but you can expose them earlier to more positive images and role models. Maybe it means distributing books, changing curricula, Im not sure.

HK: Feeling comfortable in ones skin is the hardest thing and once we reach the point of total ease with oneself; all else falls into place. Having as many people as possible read books and to see movies such as The World

-
Ulla  -  I wanna see it too ...
... I did the interview and couldn't be there for the preview, due to being stuck in the E Cape ... meh! I'll prob have to wait for the DVD. BTW the interview will be in the Big Issue - available on reputable (hehe) street corner on 6 March. YAY thanks mambagirl.

-
ulla  -  wooo i saw it
my local video store had it recently - a cool surprise to find it there.

where can i get the movie? i have read the book it is brilliant!

-
eevie  -
I saw this movie last night and it was very artfully directed and was truly amazing, really enjoyed it.