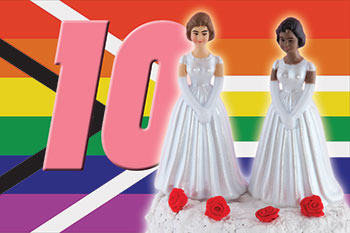 It was ten years ago this week that South Africa became the first nation on the continent and the fifth in the world to extend marriage rights to same-sex couples.
On 30 November 2006, the Civil Union Act came into effect; allowing gay and lesbian couples to either marry or enter into a civil union.
Marriage equality in South Africa was a direct result of a 1 December 2005 Constitutional Court ruling that ordered Parliament to allow people of the same sex to marry within one year.
It took a network of activists and a lesbian couple, Marié Adriaana Fourie and Cecelia Johanna Bonthuys, to bring the case to the court to force the governments hand.
The court unanimously ruled that it was indeed unconstitutional for the state to provide the benefits of marriage to opposite-sex couples while denying them to same-sex couples. The court also said that if Parliament did not take action by 1 December 2006 to remedy this, then the Marriage Act would automatically be changed to allow same-sex marriages to take place.
The final outcome was something of a compromise. Rather than simply amending the Marriage Act, the government chose to create the Civil Union Act, a separate law. To make sure it didnt discriminate, same-sex and opposite-sex couples can marry under the act.
Its passage within the year deadline was extremely tight and it almost didnt make it. The bill was passed by the National Assembly on 14 November; the ANC ordered its MPs to vote for the bill and the DA allowed its MPs to vote according to their conscience. 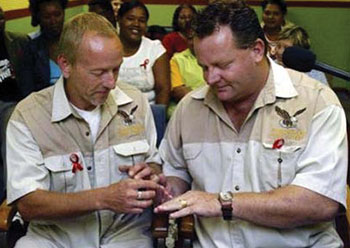 SAs first same-sex marriage
The bill was then approved by the National Council of Provinces on 28 November. It was finally signed onto law on 29 November by Deputy President Phumzile Mlambo-Ngcuka, and came into effect the following day.
South Africas first legal same-sex wedding took place in George, in the Western Cape, on Friday 1 December when Vernon Gibbs and Tony Halls exchanged vows and wedding rings at a Home Affairs office.
The couple, who ran a guest lodge and wildlife rescue centre, wore their game-ranger attire. The wedding was attended by friends, the media and the curious. It was solemnised by Petro Kruger, a Home Affairs marriage officer.
Vernon Halls-Gibbs told the SABC: I just have one message I would like to give to everybody  that we are just two men who love each other and who have loved each other for a long time. The couple are still married today.
The Civil Union Act was a great victory for the LGBT community in South Africa, giving all couples the rights, responsibilities and benefits of full marriage. But the law has not been without its problems.
While it allows for civil marriages and unions between same-sex couples, it does not impose this on churches. In fact, a decade later, none of the major Christian churches or other faiths recognise same-sex unions or marriages in South Africa. The Anglican Church and the Dutch Reformed Church have seen recent attempts to change this, but hardliners have foiled these efforts.
The state, however, has also failed to fulfill its obligations. Using a provision in the Civil Union Act that allows marriage officers to opt out of marrying same-sex couples on the basis of their conscience or beliefs, many Home Affairs branches do not offer the service at all.

Vaivi & Sape Swartz wedding
A Mambaonline report in September found that only a paltry 28,6% of Home Affairs branches have marriage officers who are willing to marry same-sex couples.
In the past decade, many couples have been turned away, humiliated and treated with disdain by Home Affairs at a time that should be among their happiest in life.
The department has promised to improve its service by sensitising its marriage officers but many activists believe that the opt out provision should be challenged in court so that its removed from the Civil Union Act.
Sape Swartz, who married her wife Vaivi in December last year after being turned away by a number of Home Affairs offices, is nevertheless thankful for the Civil Union Act.
I am so grateful that I live in a country that recognises my relationship and allows me to legally marry the love of my life, she told Mambaonline. I commend South Africas Constitution and wish the same right upon all same-sex couples around the world.