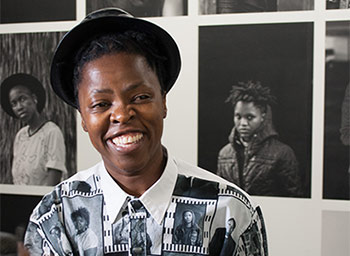 Zanele Muholi (pic: David Penney)
A self-titled visual activist, Durban-born Zanele Muholi has been photographing the LGBT community  primarily black lesbian women  for almost two decades.
Her work has both been lauded, winning many international awards, and condemned (in 2010, South Africas Arts and Culture Minister Lulu Xingwana stormed out of an exhibition featuring Muholis images of women embracing, describing them as pornographic).
She was a journalist and photographer for the groundbreaking but now sadly closed Behind the Mask LGBT website and was one of the founding members of the activist group FEW (Forum for the Empowerment of Women). Muholi has gone on to lecture around the world, launched the Inkanyiso visual activism organisation and even mentored some of the women shes photographed to become photographers in their own right.
Amongst her most iconic projects is the Faces and Phases series, for which, since 2006, she has produced around 250 portraits of lesbian and transgender Africans. The black and white images are aimed, Muholi says, to make visible an often invisible community for posterity.
It is a community that has been at the front line of the brutal and often deadly war against LGBT people in South Africa. As opposed to the all too common depiction of these women as victims, Muholis participants (she does not see them as passive subjects) exude strength, pride and power.
Faces and Phases is an important artistic and socio-political project that she continues to work on today. As the iconic series recently celebrated its tenth anniversary with an exhibition at the Stevenson Gallery in Johannesburg, Mambaonlines Luiz De Barros spoke to Muholi about the project and what drives her almost obsessive need to document those around her.
Did you ever imagine that youd be spending 10 years working on Faces and Phases?
Not really! I just took on the project as part of my life, and considering that we lost a lot people along the way, one couldnt imagine that. So, for me this is a milestone; just like we have won most of the queer milestones in this country; ranging from the Civil Union Act of 2006 to the Constitution of 1996 to the youth of 1976 to the women of 1956. I didnt know that it would go this far. All I knew is that this is my responsibility. I have a task at hand; I have to work.
You mentioned that we lost a lot of people
You know, people have been killed and weve taken a lot of risks in life, including you and including myself. A lot of people have been killed. We have buried a number of people, we have attended a lot of hate-crime cases where weve supported the families of the dead lesbians, the dead gay men, the dead trans people in this country. So much has happened, we cant just move along as if were immune. You know, Im living on the edge and anything is prone to happen. But then through the grace of the Almighty we are still here. Weve also lost a lot of our people from chronic illnesses; weve lost a lot of our people from HIV complications etc
Do you think youve almost felt a sense of urgency to capture them?
Its very important to say and mention, as a person who works in media, as yourself whos running media, whos been writing media for long. Were not visible enough, we are not visible enough. We have not made it in any mainstream magazines, as much as Id like us to. Often, when you have images of lesbians in the mainstream, its about hate crime, its about dead lesbians, its about tragedy. And its very rare that you find the black lesbian aesthetic; maybe with the gay boys its different! But with black lesbians  give us a True Love cover. How is it that were not there? We consume such magazines. I buy them too. So for me, this is my responsibility, more than anything else. Faces and Phases is a life-long project.
In terms of the participants in your series, how do you find them? Are they people that you know in your life, people that you come across, do you specifically go out to find them?
No, I dont look for people. People are alreadyout there! One of the major things for any person whos in my series: you need to be out, you need to know who you are, and you need to be of the age of consent. People who are featuring in Faces and Phases are friends and friends of friends and fellow activists and people that are regarded persons and that are recognised for their work in different ways. And I prefer to work with people that I know, than to work with strangers, and in that way its safer and people know who am I. And people are okay that they shall be seen. So no closeted kinda individuals needed for this series, cause we are all taking risks! 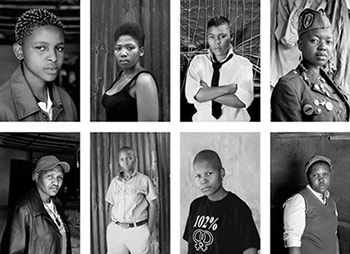 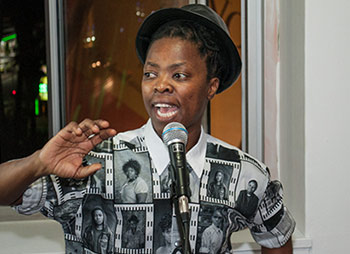 Zanele Muholi (pic: David Penney)
Would you like to be seen as a role model?
I want to be seen as Zanele Muholi. I dont want to be a role model  I want to be a human being living with other human beings. I want people to have hope and know what I am doing is possible. I want people to get as much support as possible from me. But I dont want to be an exception, I dont want to be anything thats extraordinary! I mean come-on Luiz youre doing it too! I dont know if you also see yourself as that? I just want to be me, living in the world making a difference!
I think the motivation is not to be a role model, but I think it is important to have visible people .
Sure, I get that! But that response will come from other people. It will be people who will say that you are a celebrity, it will be people who say that you are a role model.
What is Zanele like when shes not working? What does she like to do? What is your downtime?
My downtime is when Im not working. Photography has become my fix! And I spend time with people that I love. I like hanging around, but Im not for the bars and stuff  I dont drink and I dont smoke, so Im boring. So I work most of the time, I work. And I like to travel, so I travel a lot. Then its nice and also not like on vacation, cause I cannot afford more. So I travel and explore different spaces where Im there either to exhibit or give advice.
Okay, my final question. We talked about Zanele when she was 15. Describe Zanele today. What kind of woman is she?
Id say Im just a human being living in the world  passionate about photography, pushing the visual activism in ways that I know how to, thats what makes me happy. Im working towards two publications that will come out next year. Its just work, work, work  that Rihanna! [Laughs]. No, Im working because everybodys working, so theres no time to slow down. Theres a lot that still needs to be done. We havent reached any end really!
Faces and Phases 10 is on at the Stevenson Gallery (62 Juta Street, Braamfontein) until 14 October.